LFIG have published their new report entitled 'The Freelancing Agenda' this article explains the reasoning behind the report and the need for Labour to focus on the self employed as well as small business.

Labour must be the party both of and for the self employed and small business if it is to win the next election. It is on strong ground as it has an excellent Labour Business team who are widely respected. Labour’s grassroots are being filled with those who run their own businesses, work as self employed or as freelance. It is growing to become a key constituency both within the Labour party and within society.

In March 2013, Labour’s Small Business Task Force report, ‘An Enterprising Nation’, made recommendations to the Labour Party for policies to help small businesses. The report looked in part at freelancing and self-employment, and suggested that ‘greater clarity around the distinction between genuine freelancing and false self-employment is required to enable small businesses to use freelancers legitimately’. 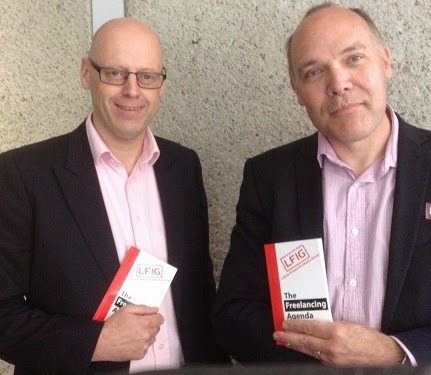 The publication of  our report entitled ‘The Freelancing Agenda’, commissioned by the Labour Finance and Industry Group, comes partly in response to that. It offers a set of principles, in the form of a Charter, and some specific policy recommendations, including a new definition of freelancing for tax and other purposes, that can help Labour to update its policies for this constituency, by enhancing, not compromising, the party’s core values. Labour needs to offer both a small business agenda and also one for the self employed too.

Last week Demos published a report in this area entitled ‘Going it alone’, its author Duncan O’Leary noted that “The Labour party has an uneasy relationship with self-employment. Fears of tax evasion by high earners and the exploitation of low earners dominate the party’s discourse. The policy focus is on stamping out abuse, rather than supporting those for whom self-employment is an active choice”.

These are the goals of our freelancers’ charter. To provide a positive agenda for the self employed that Labour can embrace.

Our report is published as a short booklet, it looks at the size of the freelance economy, the lack of definition and recognition that freelancing faces and the evolution of the market. The report recognises that freelancers range from precariat workers through to independent professionals but there is commonality between all the groups. It discusses the evolution of the freelancing market and the need for agency freelancers to use limited liability companies. It differentiates genuine freelancers from those using the model for tax avoidance and those in forced self employment. One of the recommendations includes a well thought out proposal to create a special freelancer limited company (FLTD) which it suggests will allow some of the onerous and unachievable requirements of IR35 to be toned down and will allow for clearer identification of freelancers.

We see the Charter as providing a platform or operating model upon which future policy can be developed for freelancers. Such that one could consider individual polices to be the Apps that would operate on the platform.”

We have made a start too and issued the report with a few of our own policies or Apps and these include the creation of this Freelancing Limited Company (FLTD) and the appointment of a Minister with direct responsibility for freelancers.

It is timely because the ONS have reported that the growth in self employment outstrips new jobs[1].Mike Cherry the Policy Chairman for the FSB has said that it represents a ‘structural change’ in the labour market and is here to stay. The RSA recently reported that the number of people working as self-employed is set to outstrip those working in the public sector by 2016.
To write the report we have spoken to individuals and groups representing actors, journalists, artists, pharmacists, IT workers, management consultants, construction workers, teachers, film and television workers, agencies, accountants, tax specialists and more besides. Interestingly the two consistent issues coming through are for .’clarity and parity’. For the independent professionals this is clarity over their status as self-employed and parity with other businesses also competing for business. They want to the chance to compete fairly and be judged as being in business on their own account. For the precariat workers and others they want parity with other workers when they have to interface with the benefits system and clarity over how they can receive fair treatment at work. All sight the right to be paid and the right to be paid on time as key requirements. While it is outrageous to pay wages late large firms seems to get away with the late payment of small businesses.
Our report concludes that freelancers are not small businesses in the traditional sense, that they are instead their own economic agents often with premium and important skills which have allowed small firms to innovate and grow. That they are drivers of economic growth. I see that in effect just as every small shop doesn’t want to be the next Tesco’s not every IT freelancer wants to be the next Google. The growth isn’t in their own businesses but elsewhere in the economy. They are not a competing shadow workforce but positive complementary one which deserves recognition and be protected and nurtured.

There is a shared agenda for freelancers and a lot common purpose between all groups. I hope that this report can help all groups come together and build a positive agenda for the common good. The LFIG report offers the chance for Labour to seize the initiative and clearly differentiate itself as the most progressive and innovative party in this area and clearly identify itself as for the party for the self-employed. We encourage you to read the report, review the charter and help put the issue of freelancing and the self-employed on the agenda for the general election.

Philip Ross is a member of LFIG and the lead author the report ‘The Freelancing Agenda’.


[1] http://www.cipd.co.uk/pm/peoplemanagement/b/weblog/archive/2014/02/20/growth-in-self-employment-outstrips-new-jobs-shows-ons-data.aspx
Posted by Philip Ross at 06:36