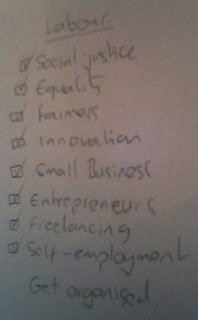 The Labour Small Business Forum
What is it?
It is a network of Labour party members and supporters who work for themselves, now or in the past, or those that work for a small business.

When was it setup?

It was originally set-up in 2003 in Hertfordshire and Bedfordshire. Then we networked together people all over the country as small business members. We did some review of policy documents together via email and did some local meetings. In Hertfordshire former Labour MP and small businessman Kerry Pollard (St Albans) led a workshop as a part of partnership into power. We also ran a fringe meeting at conference. We are now organising nationally.

How does it fit with other organisations in Labour?

The Labour Finance and Industry Group exists already already and we hope to organise through LFIG in the future. Though our network members won’t need to be members of LFIG.
It is also complimentary to initiatives like ‘Movement for Change’ which is trying to set up small business forums in CLPs/Cities/Towns to listen to small businesses and then have campaigning actions.
Our focus is on the outcome ie that Labour can be both the party for and OF small business.