Invention and Innovation - Foundations for success

Our small business fringe meeting was addressed by Richard Little of the PPMA. He talked about the great British success story of innovation and invention and his contribution was widely discussed by members of the forum and those at the the event. Below is an article by Richard covering his main themes.


Ed Milliband has stated that he wants Labour to be the party of the small business and the self employed.  A sensible approach because over half of UK turnover is generated by small business and there are nearly 5 million such businesses.  Policies which help just half of such companies employ just one more person would have a dramatic impact on UK finances and prospects.

There are many ongoing discussions about making finance easier for small firms and initiatives and grants for market research, training, coaching and attending exhibitions etc.  All of these are welcome and all make a difference.  Innovation and entrepreneurship are, quite rightly, for everyone and not just the Conservatives!

However, I contend that some small innovative businesses suffer because of a change in national attitudes over the last few years that needs attention and I would welcome initiatives and policies from the Labour Party to put things right.  The great advantage of such policies would be that they need not be too expensive but could make a big difference.

I refer to Invention.  When the word Inventor is used, it is a sad fact that in the UK, people's minds leap to a mental picture of Caractacus Potts in his workshop rather than consider the people behind the inventions behind so many of the things we use today and take for granted.

Where would we be without Alexander Graham Bell's telephone or Marconi's wireless or Daimler's car?   Apple has 3000 patents, and Audi advertises the fact that it has filed 9,621 patents - rather more than NASA at 6,509  Each of these patents names employees including scientists and engineers as Inventors.

An Inventor is a respectable and important thing to be - and anyone can be one.

Inventors produce inventions and inventions can be protected. Monopoly rights generated via patents around successful new products for which there is a demand can allow prices that permit UK wage levels and thus manufacturing here in the UK as well as possibilities for exports.

Small businesses based around inventors can actually do rather well - Dunlop, Hornby, Thorneycroft, Pilkington, Dyson and many others have employed many thousands of people here in the UK over the years.  The inventions of Whittle, Cockerell, Mitchell, Sopwith, Marconi, Faraday and Watson Watt have either saved our bacon or been the USP of what became huge industrial companies - or both.

Britain used to be associated with invention and innovation.  Now Japan files 15x as many patents as we do, USA is 12x (we used to be on a par) and even France files 3x as many as we do.

If you ask people on the street to name actors, footballers or even chefs you might get quite a selection but living inventors - probably Dyson, possibly Sinclair but that's probably it.

There are many things that the Labour Party in government will have to do but I beg that some time is put aside for the rehabilitation of inventors.  If my staff get married I can give £1000 tax free as a gift.  How about  I can give a tax free reward to someone who's named on a patent when it gets granted?  How about patent office fees are reduced if inventors are willing to share their invention with UK businesses in return for a guaranteed royalty?  How about some garden party invitations to successful patentees?

Currently patents (and other forms of IPR) are considered individual or company assets and individuals and companies have the whole responsibility and cost associated with filing and maintaining patents.  I am not suggesting that the state should directly pay towards this but I do think that the state should consider the fact that a good quality granted patent owned by a UK company is actually potentially a national asset too...

I suggest that Government business departments need to develop a realistic way to reassess patents as potential national assets rather than just individual ones. They may need to be ready to step in in the national interest to help protect ideas that can be exploited here in the UK where inventors or businesses can't afford wide coverage.

Perhaps the patent office can be charged with helping get patent filings right first time - so many lapse because small companies with their first innovation take advantage of 'free filing' and word the patent so badly it either can't be easily granted or easily enforced.  The state should help select worthy concepts and help protect them for exploitation in the UK -  perhaps by funding foreign applications by means of grant or in return for royalties. 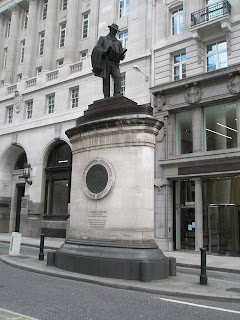 On a larger scale, how about that as and when the state gives a grant for R&D the government departments at least pay some attention to what is subsequently developed, perhaps via some form of technical assessment body, reporting to health, transport, utilities and defense. This would probably produce much better returns for grants given than the current situation of closed doors to any small business with a new idea.  I know - try getting air disinfection systems even considered by the NHS!

British invention deserves to be in the business section of the paper, not just the light entertainment section.

Now and in the future, the success of British Manufacturing will depend on being smarter, more efficient, more creative and exploiting British ideas here rather than abroad.  Outside the Royal Exchange in London last week I stood next to the wonderful statue of J.H Greathead who invented the cutting machines that enabled the building of tube tunnels.

When we start putting up statues to engineers and inventors again I predict that we'll be on the road to recovery.
Posted by Labour Small Business Forum at 03:52