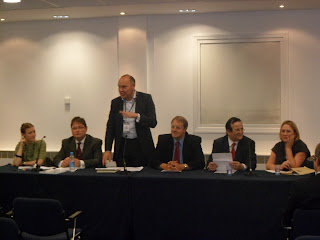 There were many themes to this years Labour conference, but a strong one much to surprise was that of small business. Labour ran a business day on the Monday in which the shadow cabinet met with business people from all over the country. Then on the Monday there was an open microphone session in Manchester Central where delegates and representatives could put their questions to the Labour business team. There were a few good fringe events too, with the Fabians doing one on the changing nature of work. The Federation of Small Business also invited Ed Balls a meeting. There had been much talk about finance, innovation and the changing of the work place. That small business will be the driver that propels the economy forward was common currency.  The recovery will not be led by a few large firm but by many small ones. The need to empower small business isn’t just about the economy it is about empowering a generation.

Then on the Tuesday Ed Milliband had used his conference speech to tell people the small businessman Arthur Henderson whose firm had been let down by the banks and the financial institutions. Bank are there he noted to serve business it is not the other way round. This echoes strongly opinions and discussions already taking place in the City among institutions themselves about where it all went wrong and what they need to do to fix it.

In the evening it was the turn of the Labour Small Business Forum. The Forum is a network of Labour members and supporters who work for themselves or in a small business and we held our fringe meeting and invited speakers to come and talk with us. Instead of being external organisation coming to talk to Labour the idea of the forum is for us to talk about small business ourselves as we are the party of small business. The distinction is that instead of small business coming to the party to talk to the members to raise issues, we the network  and members ask them to discuss with us. The distinction between the two positions may sound small but it is important. The aim of the Labour Small Business Forum is that Labour if is to become the party for small business, it needs to be the party OF small business. Which means that we need to organise the thousands of people in the party working for or in small firms or as self-employed.

We had the best small business line up at conference. After my introduction in which I stressed the importance of modernising the way we work and supporting emerging firms and freelance working, John Walker the national chairman of the Federation of Small Business picked up on my comments about IR35 and agreed that it was a complicated and unwieldy tax that has not been resolved and was a bar for going into business. He reiterated the familiar problems that small businesses have with getting hold of finance from the banks. Confidence in financial institutions is a problem and he made reference to the mis-selling of interest rate swaps to many of his members. This chimed with what Ed had said during his speech. As a policy call he suggested that it was hard for small firms to initially grow and take on people and suggested offering an NI holiday to firms that did this.

He was followed by Dr Jo Twist of the UKIE (the trade association for the UK’s games industry), her points neatly dovetailed with his as she talked about the phenomena of crowdfunding which was a way that investors could lend to companies directly using the internet as a platform and thereby circumnavigating the banks. Which the chair noted that commentators saying that pouring subsidy into banking may end up destroying this new innovation’. Jo explained how in the USA they have passed the JOBS Act which makes it easier for this sort of lending to take place and now places like Silicon Valley are a light with such funding. She said the FSA need s to make similar allowances in the UK. She had discussed this recently with Harriet Harman at a round table session.  The other issue have for their members and the growing number of small micro-firms that start in the games is the training and skills and they have lobbied successfully to reintroduce coding into the curriculum at school. So people will not only know how to use WORD but could write one too. Her policy call was to offer to collaborate with Labour in delivering an excellent technical baccalaureate.

Following on the theme of innovation was RichardLittle from the PPMA. Richard who has a manufacturing background whose success comes in part from design and development talked about the need for Britain to celebrate its status as a nation of inventors and innovators, rather than being embarrassed by it. He suggested also a scheme whereby people could sign over unwanted patents to the state as an endowment and also for Government to make it easy to take advantage of new inventions and innovations in places like the NHS. He said he would know we were successful when we started putting up statues to inventors again, like the one for Greathead near Bank Station in London.

Emily Thomas, who had been a special advisor at the Treasury and the DTi talked about the difficulties in setting employee owned business and the amount of bureaucracy that is in involved. She noted that only 14-15% of entrepreneurs are women and we need to do something to level the playing field so women can go into business. She noted that women are often suited to business as it can offer flexibility. Discussions noted  that it was also about modernising both tax and public services too so they work for the 21st century. She noted that Government spends billions of pounds each year on procurement and needs to do more to ensure that more of these contracts go to small firms.
In answer to the other panellist Shadow Minister Toby Perkins MP, who had run his own firm before entering Parliament acknowledged the concerns raised by the other speakers and was interested in the points raised by Richard Little on patents. He pledged that Labour would support
Vince Cable's plans for a British Investment bank, though he suspected that the coalition may not complete delivery of it but Labour would finish off when re-elected.  He noted the importance of skills and the technical baccalaureate and welcomed Jo Twists discussions about crowdfunding. He noted too the diversity of ownership but the need to encourage and support more enterpreneurs (as he had been himself).

The meeting rounded off with a number of questions from the audience whose number now included Chris Leslie MP who came to listen and seemed also pleased at the enthusiasm and passion that the meeting was showing for small business and Labour.
Posted by Labour Small Business Forum at 02:15