Becoming the party of small business 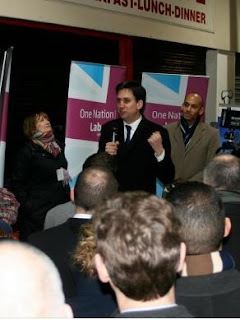 Is Labour becoming the party of and for small business? It certainly seemed like it last Monday when I joined with a few hundred others who were members of Labour Entrepreneurial and Small Business network at Brixton Market to celebrate the release of the report from Labour’s independent task force on small business. What is interesting is the growing momentum behind such events as they seem to be getting larger and larger and have more and more of a buzz each time.

There is a real meeting of minds because Labour is beginning really to get and understand the small business economy and its 88 page report - for the Policy Review - included over 100 recommendations is proof of that. But it is not the only evidence, the other interesting thing is that business realises that Labour understands what it is about because Labour’s comments about wealth and enterprise are not simply old-rhetoric but are based on real understanding. For instance Chuka has recently said that he has banned his team from using the phrase ‘SME’, because he considers it to be too broad a definition of small firms, encompassing as it does the self employed right up to the 250 person enterprise. Labour it seems is not proposing a one size fits all model for business but a truly tailored approach.

To appreciate why this is you simply need to look at Labour’s business team. It is headed by Chukka Umunna whose father came to this country and established his own small firm. From what Chuka says and does it is clear that this isn’t simply another brief but it is in his blood. Alongside him is Toby Perkins the MP for Chesterfield. Toby ran his own small business before entering Parliament so when he goes around talking to small firms around the country he understands what it is like to raise finance and to employ people and the burden of regulation. In the Lords they have Parry Mitchell who as a serial entrepreneur founded three companies all of which grew to be market leaders. Backing them there seems to be a brilliant team of advisors and as the cold evening in  Brixton showed party members and other are confident to show their colours as small business people for and in the Labour Party. As for the Task Force report it was originally headed by the brilliant Nigel Dougherty who spearheaded process forward but suffered a sad and untimely death last year. It was picked up by Bill Thomas formerly of HP who has expertly brought together business representatives, academics and entrepreneur and put together the report.

Another pointer to this great understanding is that the report wasn’t launched at some fancy offices in Canary Wharf or at some bank, but in Brixton Market. Labour realises that the beating heart of enterprise in our country isn’t in board rooms of venture capitalists but with the self-employed; the white van man, the freelancer; the market firm and the small enterprise. While many in the Labour Party still cling to the belief that the next election is going to fought on a platform on health and education the truth is different. The battle field is going to be growth and prosperity and is going to be fought around how that can be delivered. Labour is positioning itself clearly to say that it will be delivered through small business and that their values are one and same as ours. Previously Labour governments worked hard to help small business but there was always a feeling that they were at arms lengths from small business. But from what I saw and heard on Monday and saw in the report, Labour had moved from nodding terms with small business to a proper handshake and hopefully onwards to a full embrace. The idea that Labour should be the party of and for small business, isn’t rhetoric and it has moved beyond simply aspiration and is on course to become a tangible reality.

Philip Ross is a member of LFIG and the founder of the Labour Small Business Forum which wants to build a network of Labour members in small business and identify those in every constituency. To get involved contact Philip at rosspe@talk21.com  #philiprosslgc
A second article on the Task Force Report will be published later this week
Posted by Labour Small Business Forum at 05:42