What is the City for? 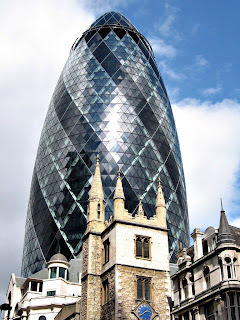 What is the City for? It is not just a question that I am posing but is a question that the City of London is asking itself at the meetings of various financial think tanks and conferences. It is just as well because the rest of the country - families, small businesses and individuals are all asking it.
Long Finance rhetorically asks ‘when will we know that our financial system is working?’. Of course we can take today’s position as the false positive, meanwhile the financial industry itself offers technical reasons and procedural solutions to each of its failings and suggest that all these faults can be considered separately and discretely. They consider there to be just a few rotten apples, whereas others suggest that it is now the whole barrel that is rotten.
Does it matter now how many apples are rotten? Whether it is some or all, or whether the system can be technically fixed by a few modifications and a bit of extra regulation? Because at the heart of it is an issue of confidence in the entire financial system and of those who run it. For example, how can we persuade people to put money aside for their retirement in such a financial system? Once people pooled their funds and resources to create mutual organisations, they would save together and lend to each other through their own trusted institutions, whether as building societies or mutual insurance companies. The loss of the Mutuals and their disconnection from their grassroots is significant, while their financial resources and reserves may have been squandered, what it seems was also lost was the principles and ethics that underlined them. The fact is that they existed to collectively serve their members (the savers, borrowers and policy holders) and not to exploit them or their communities. Other institutions though not mutual were also founded on similar ethics, for instance Barclays was founded as a Quaker bank. It was very telling that Bob Diamond didn’t know what the Quaker principles were when asked at the Select Committee.
Now the image - and perhaps the reality - is that the banking system exists to enrich those that run it (the bankers, fund managers and the like), not those that it serves and the only control we have it is not through ethics, accountability or principles but just regulation. Therein is the root of our financial crisis. (Further regulation is not the answer as it favours the large not the small).
Instead of endowing members with the profits from its schemes, the image is that the only endowments done are into bonuses. While it is true that we need to reward people for their effort, why is it that banking and the senior public sector are the only areas where profitability and performance don’t seem to matter?
The banking crisis suggests incompetence; the Libor crisis corruption and rate fixing scam on small business (interest rate swaps) suggests exploitation.
On this evidence the banking system doesn’t seem to be there for us or small business. Why should hard working families entrust their hard earned monies to such institutions? We can all see the advantages of prudent saving for old age and the need for insurance and can work through our dislike of the system to make such savings, but not everyone will. This dislike of the system and belief that they are being ripped off is a strong motivator. There is a need to persuade people that institutions can be trusted to look after their money; that they won’t just use it to enrich themselves, but will use it for instance to grow sustainable pensions for them and in that process they won’t be exploiting the struggling small businesses in our communities. Some say it is not in the banks interests to exploit small firms and the market understands the need to act in a sustainable way. In the book ‘The Price of Fish’ they compare the financial system to fishing and point out that it wasn’t in the fisherman’s interest to overfish and ruin the seas, but they did it time and time again.
How close are we to ruin? The fisherman never knew, do we? Do we need a new ethical and principle based revolution? To me that means more mutualisation perhaps at a lower level; failing that at the very least we should go back and implement those original Quaker and Barclay principles that seem to have been forgotten of ‘honesty, integrity and plain dealing’.