The Forum is a network of Labour supporters and members, it isn't an official party organisation. The views expressed are those held by individuals and should not be construed as party policy. 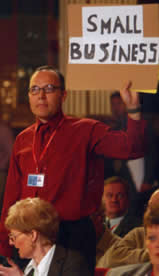 The Labour Small business forum was founded by Philip Ross. He has been an active in the party since 1992. He was Labour's parliamentary candidate for North East Bedfordshire in 2001.

In 1997 he set up his own consultancy and provided consultancy services to investment banks (Salomon Brothers, CitiGroup) and other financial institutions. Among his clients was the Labour Party for whom he would perform an annual contract processing electoral data for Elpack and later Labour contact.

In 1999 as a freelance he opposed the introduction of IR35 and helped to found the Professional Contractors Group. This was the first trade association to be founded on-line and pioneered the way that the internet was used for political campaigning and lobbying. He has written a book - Freedom to Freelance - about the campaign.

Since the election of Ed Miliband as Labour leader Philip has been writing regular articles for Progress about small business and working with the Labour small business team is now working to revive the original Labour Small Business Forum. He currently works for a small business (in which he has a shareholding) which provides business and IT consultancy in London, Frankfurt and Luxembourg.